Look how cool these little critters are!

The first person to watch this video and comment with how cuttlefish change color and what phylum cuttlefish are in will win one of my favorite organic Trader Joe's lolly-pops!

How much do you trust Physics?

Would you try this?

Comment and let everyone know whether you would be willing to try this experiment and why or why not??

The boys had the privilege of playing two of my favorite games in PE today: Screaming toes and Ships and Sailors. In screaming toes, the players stand in a circle and look at someone in the circles toes. When I say "screaming toes," everyone looks up at the person whose toes they were gazing at. If you are looking at someone who is also looking at you, there is a duel. At the count of 3, the duelers scream. Whoever stops screaming 1st is the winner and stays in the circle. I partly love this game so much because I am so good at it. I out-screamed all of the Salam Academy boys! Next, we played ships and Sailors. This game involves me calling out different orders, and the players following the orders. The orders include, salute the captain, hit the deck, to the ship, to the shore, walk the plank, man over board, and others. Abdullah M. won today's game.

In 6th grade science, we went outside to perform a lab that explored some aspects of kinetic energy. Different sized balls (tennis, golf, ping-pong, and baseball) were dropped from varying heights into Play-Doh. The indent was measured and used to discern how mass and height dropped from affects the balls kinetic and potential energy. Here are some highlights: 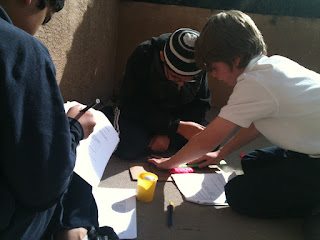 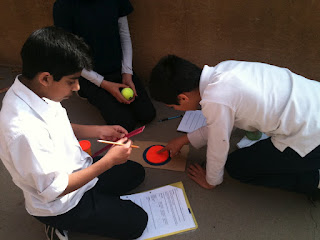 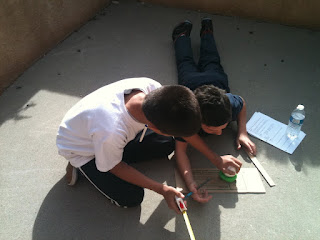 In 7th grade, the students (except Fatimah and Nimra due to time) presented their wonderfully creative projects on Invertebrates. Up first was Taha and Odey. Their presentation on the deadly box jelly was extremely informative and comedic. The boys kept us giggling while discussing a serious topic. Next up was Sara and Marwa's hysterical puppet show! We learned a ton while laughing our faces off! Last up was Rinad, Amina, Alexis, and Gada. Their presentation on ctenophores and Portuguese Man-O-War's was very informative and their posters were gorgeous! 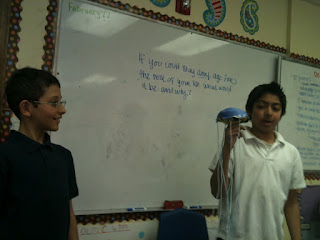 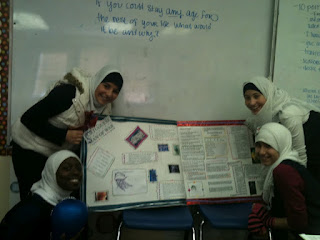 I am looking forward to seeing Fatimah and Nimra's project tomorrow and for FISH DISSECTIONS with the 8th graders!!!
Posted by Unknown at 10:34 PM No comments: