The Noble Death of a Lovely Chicken

A co-worker of mine, John, used to rent an apartment from a woman that ran a herd-share. A herd-share is like a farm-share, but instead of paying a membership fee or working a couple hours a week for a box of veggies, you pay a membership or work a couple hours for fresh, local meat, milk, eggs, and cheese. The herd consisted of dairy cows, meat cow, pigs, goats, and chickens, and members get a share of some of the highest quality food products from a small scale family operation. John helped out with the animals in return for the experience and delicious food and therefore is now skilled at slaughtering and butchering as well as caring for happy farm animals. As part of my internship at the organic farm, we sometimes participate in classes on the farm and John proposed a class on chickens for us. Several of the interns (including me) are vegetarians (but for different reasons) and while we were nervous about the class, we voted that it would be a very worthwhile experience. John's friend/old landlord recently decided to downsize her herd, and donated some of the older chickens to our class. We set a date for this past Thursday, and the class was on.

I said that the interns were vegetarians for different reasons. I believe that humans are omnivores and that it is natural for us to eat meat, I just don't agree with how meat is generally produced in this country. I think that the industrial food lots and slaughter houses that supply most of the meat found in the grocery stores are disgusting and cruel. I don't eat meat from those places because I do not want to support what their operations. My abstinence from mainstream meat is something of a boycott; every dollar counts and if enough people join in they will not be able to destroy the environment with huge waste ponds full of antibiotics and hormones while being incredibly cruel to animals. Meat like that is not happy meat. But, I personally feel that meat that I or a friend obtains by hunting is happy meat and livestock that is raised properly and organically is also happy meat. It is not enough for meat to be "organic," however, and I will not eat organic meat from Whole Foods; I really need to see the animal or it needs to come from someone that I really trust and I absolutely do not trust Whole Foods. The chickens from the herd-share meet all my criteria for happy meat and to actually slaughter and clean it myself made it even more authentically aligned with my values. I was excited for this experience and excited to eat happy chicken, but also a little nervous about killing the chicken with my own hands.

On the day of the class, John brought the chickens to the farm in the same dog crate that Gnasher sleeps in. The chickens had a bed of hay and a watering contraption in their crate. They were truly beautiful chickens: two roosters and five hens. I guess I was expecting them to be the fat white chickens that you see in chicken houses being exposed  in documentaries. These chickens were all different colors and looked strong and healthy. 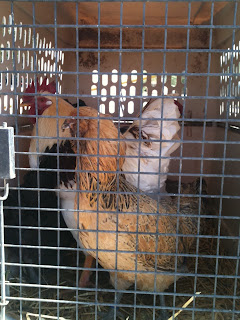 We set up a large pot over a propane burner and put a ladder over saw horses to hang the chickens from and allow them to bleed out. John took a big rooster from the crate by grabbing it by its legs. Once it was upside down, it calmed down quickly. He used a slip knot to hang the chicken from the ladder and let it calm down for a couple more seconds. John showed us where on the neck to cut and had each of us feel the jaw bone to make sure we understood exactly where the cut needed to be made. John killed the first bird, explaining as he went along; he was was quick, careful, and respectful, and thanked the chicken with a kiss to the cheek before making the incision. When the blood was running into the bucket, there were several full body spasms with dramatic wing flapping, and then the chicken had passed. The chicken remained hanging over the bucket to allow the rest of the blood to drain out, and it was someone else's turn to choose a chicken. 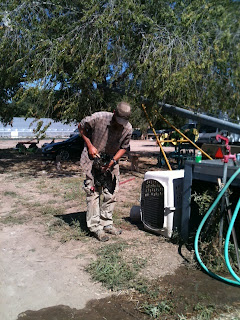 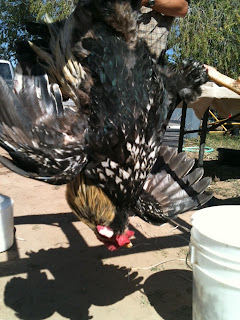 My co-worker Nick went next, followed by Jess, and then it was my turn. I chose my chicken, a smallish female with lots of personality, and took her from the crate. When I was trying to catch her feet in the crate, she kept ducking away from me and cowering in the far back corner. When I finally caught her and pulled her out, she made a crying sound that was heartbreaking. As soon as I had her upside down she calmed right down and I hung her from her foot from the ladder. John handed me the knife and I found the spot right under the jaw bone where I needed to cut. I was nervous mostly because I was worried I would not be fast and swift and I would cause the poor hen to suffer. I made the first incision quickly and blood began rushing out of the wound. It was a little shocking how warm the blood was and a little disconcerting to be covered in fresh, warm blood. The second cut was a little more difficult to make, but I was able to do it and then I held her as she hung over the bucket and bled out. It is important to hold the bird as it dies so that it does not come free as it spasms and land on the ground. It was sad to feel the life drain out of the sweet bird that had just been so animated, but I knew she had lived a good life. 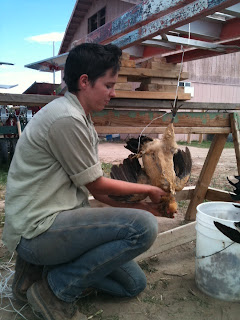 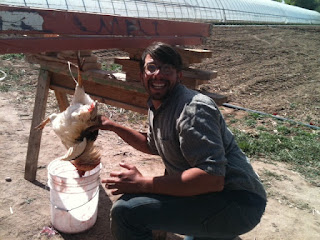 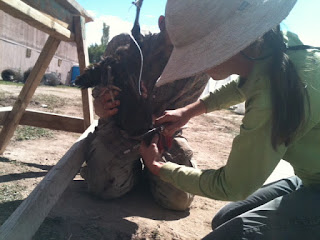 After each of us had carefully and thoughtfully killed a bird, it was time to de-feather them. We dunked the birds in 150F water with a bit of detergent for about 2 minutes. It was important to have the water at this temperature to avoid scalding the skin and the detergent was equally important to allow the water to get beyond the oil secreted by the birds oil gland and reach the follicle. As soon as I lifted my chicken from the hot water I began bushing the feathers off against their natural grain. Most of the small feathers came off so easily it was a bit surprising. The larger feathers in the wings and tail took a little more effort but came out easily enough. The difficult part was removing feathers that had broken close to the follicle, and there were quite a bit of these on her back as she was a popular hen with the roosters. Once we removed as many feathers as was really feasible, it was time to remove the organs. 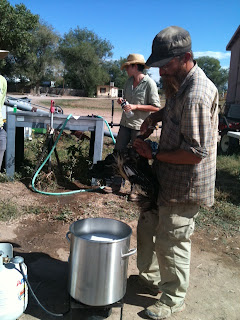 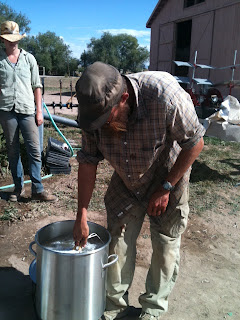 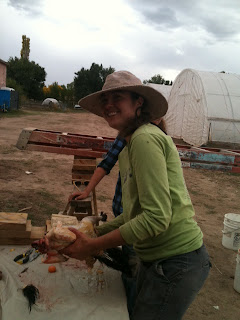 The first step was the cut off the heads and feet. To cut off the head we cut the flesh around the neck and then twisted the neck at that point until the head popped off. Then I found the joint between the foot and the leg and cut there so I was only cutting cartilage rather than bone. The next step was to remove the oil glad at the top of the tail. Apparently if this is left intact, it will make a roast chicken taste quite funky. Next, we removed the crop from the neck region. It was then time to cut into the body cavity; I cut a slit into the abdomen very carefully and cut layer by layer to be sure not to cut into the any organs. Once the cut was open, I used my fingers to widen the incision and then reach inside and loosen the connections between the entrails and the side of the body cavity. I accidentally burst the gall bladder, but it wasn't a big deal because I was not planning on saving the organs, although the neon green color was a bit startling. Once all the insides were out, I cut out the rectum, peeled out the lungs, pulled out the trachea, and my chicken was ready to be rinsed and refrigerated. One of the coolest things in pulling out the organs was finding several eggs growing and being prepared for laying. I found one in the oviduct that was a full size egg, only soft. It was amazing to see this "conveyor belt" of eggs and have a first-hand understanding of how eggs are produced in the hen's body. 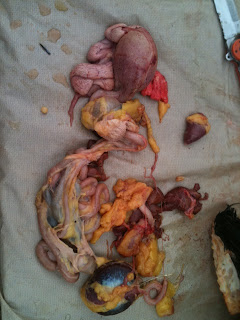 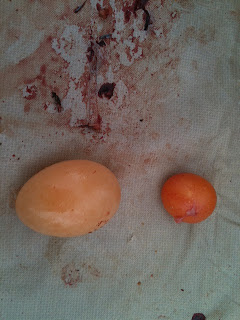 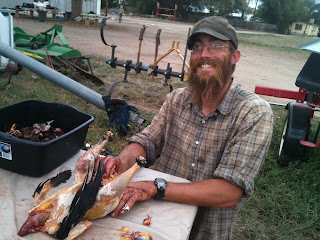 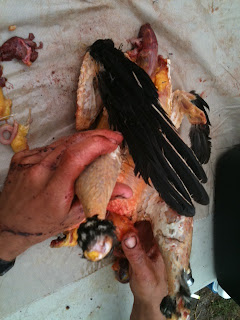 Once the chicken was rinsed, I double bagged it and put it on ice. We cleaned up the feathers and the insides and the blood. We put away the ladders, and the the buckets, and the petroleum burner. John told us that the chickens needed to be refrigerated for a couple days to allow rigor mortis to pass and to let the meat cure. I was a little disappointed not to eat it right away, but also relieved that I did not need to cook it immediately. because I was exhausted by an emotional day.

I decided to roast the chicken on Sunday when I would have enough time to not feel rushed. I found a recipe: TheKitchn.com: Roasted Chicken and bought some potatoes, sweet potatoes, and some fresh sage, thyme, and oregano. I already had the lemon, olive oil, onions, garlic, and carrots the recipe calls for. Roasting a chicken was surprisingly easy. It took about 20 minutes to prepare, 1 hour 10 minutes to roast, and then 10 minutes to carve and serve. It was probably the most delicious thing I have ever cooked and took so little effort (at least for the cooking part). I completely understand why people do not want to eat vegetarian. My husband and I are both looking forward to when we have an opportunity like this again. 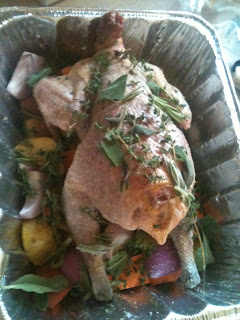 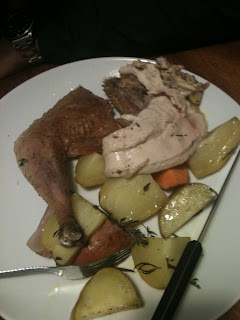 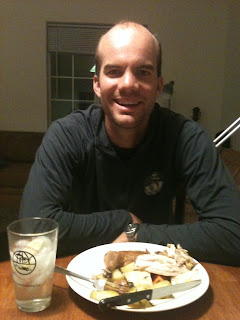 Also, Gnasher was a VERY happy pup, having consumed lots of chicken; that lucky pup!
Posted by Unknown at 5:39 AM 3 comments: