Today, Caleb, Layla, Gnasher, and I participated in the Albuquerque Open Space spring clean-up of the Indian School trailhead. I had never hiked out from this trailhead before, so it was a real treat to explore a new area. And, we did some serious exploring. Instead of focusing on the dog poop right at the trailhead, we decided to hike out as far as we could in an hour and a half and then pick up poop and garbage on the way back. Gnasher was kind enough to carry our bags and gloves and the recycling we picked up along the way. We came across some 4th year medical students that were doing a month long wilderness medicine course. They were practicing vertical rescue and had a stretcher hung up with climbing gear and they were securing and lowering a "patient." It looked really fun! The instructor had a really cool dog that Gnash had a ball running around with. They were running through a stream and across trails and through the bushes. After that, Gnasher was filthy, but he was about to get a lot dirtier. We climbed up some rocks next to a small waterfall and saw that the trail continued up next to the stream. We followed the stream and found a cave! Unfortunately the cave was full of mud and not very deep, so we didn't explore it. A little bit further up, we had to cross the stream and climb up some rocks that had been coated in mud. Our wet sneakers made climbing the muddy rocks quite slippery. I slipped and was falling into the stream. Layla tried to catch me, and I pulled her in with me. It was pretty hysterical. Afterwards, Layla commented, "You are really heavy, Mrs. Maggi!" and she received a dirty look in response. We continued up until we saw a good turnaround point and resting spot. Gnasher, Caleb, and Layla played Gnash's favorite form of tag (when you chase him) for a bit, and then we headed back down. It was finally time to work. We each had a plastic bag and plastic glove and picked up a bunch of dog poop and little pieces of garbage along the way. Back at the trailhead, we ate lots of snacks and waited for the raffle. Layla won fancy hiking socks and Caleb, and I both won reusable shopping bags (Gnash didn't get a raffle ticket). Caleb's is a really nice canvas bag that he filled with complimentary healthy snacks. After I brought Caleb and Layla home, Gnasher and I took the most amazing nap! What a wonderful day! Thank you Layla and Caleb!!!! 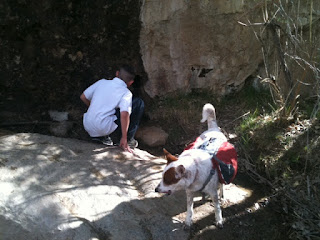 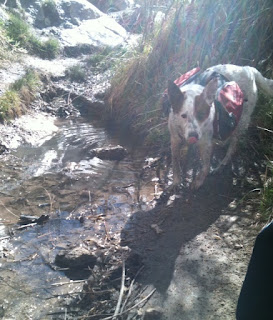 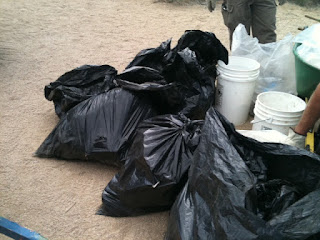 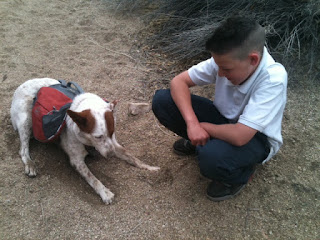 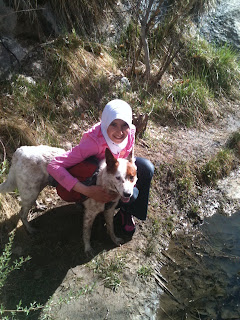 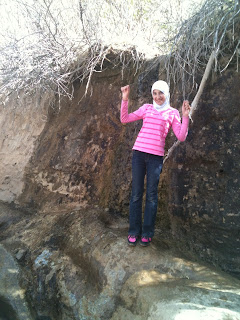