Battle of the Beets

Last Friday, a friend gave me a bunch of beets with the greens still attached. I had been planning to make homemade veggie patties for two potlucks I was attending over the weekend, and knowing that beets are a common ingredient in veggie burgers, I searched recipes making use of the gifted beets. I found a recipe from the blog foodydoody that used the beets and recipe from The New York Times Recipes for Health that utilized the beet greens. Two different recipes with two different parts of a beet plant: I decided it would be fun to make both and compare the two.

The beet greens needed to be steamed, the onion, carrot, garlic, and ginger were sauteed, and the egg, chick peas, and lemon juice were pureed. These ingredients were mixed with the cooked quinoa, salt, pepper, and cumin, and then cooked. The mixture was rather crumbly, so rather than forming little patties, I scooped up a big spoonful and rounded the edges before dropping it into hot oil in a frying pan. When one side was fried, I flipped the patty onto a baking sheet and baked them for 12 minutes. The whole process took about 1.5 hours including cooking the quinoa. Also, the recipe sites that it yields 4-6 patties. I made 22 modest sized patties by following the recipe.

My patties did not look as good as the ones in the picture below. They were a little misshapen and crumbly even after baking, but they tasted amazing and were a huge hit at  both potlucks. We did not reheat them and ate them without bread or fixings. They were that good that they stood alone and were good at room temperature! 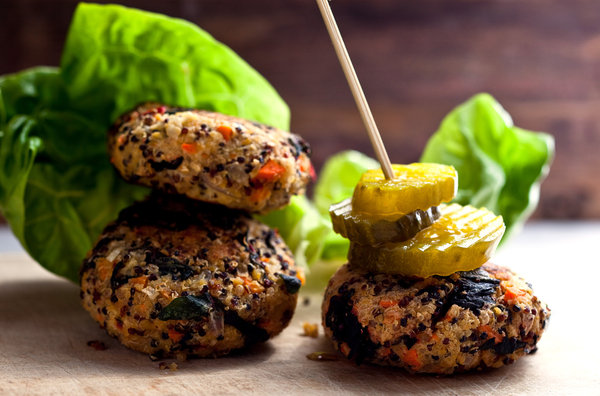 Roasting the beets took over an hour, but the rest of the prep was the same as the first recipe. The onions and garlic were sauteed and the white northern beans were pureed with the egg and lemon juice. The smoked paprika tasted and smelled amazing and gave the recipe a nice BBQ flavor, but the beets were very beety and really dominated the taste. The mashed roasted beets helped hold the patties together before cooking, but these patties were just as crumbly after cooking. I have been eating these patties over salad, and have been having trouble finishing all the leftovers.

The winner of the battle of the beets: Beet Greens and Quinoa Veggie Patties!
Posted by Unknown at 4:57 PM 2 comments: