It is the time of year again when I start preparing for another an adventure of a lifetime. This is now my fourth year teaching summer study abroad courses for Broadreach and every year has brought new challenges, opportunities for growth, exploration, and inspiration. As I get ready to set off with a new group of students to a new and exotic corner of the world, I can't help but reflect on my experiences from last summer. Last summer's Thailand trip was really special in many different ways for me. The trip started with an opportunity to do some scouting for future programs and explore in the northern part of the country. I then went back to Bangkok and took a very slow public train to Ayutthaya to check on the accommodations and activities for my group there. In Ayutthaya, I went on a private boat tour of the major Wats and learned a lot about the history of Thailand. Back in Bangkok, I met my students and set out on an epic experience with some great kids. The program brought us in contact with many interesting people and places and I am quite sure we all learned a fair bit about fish, Thailand, and ourselves. After my students set off for the US, I met up with one of my favorite girls on the planet and I got to see yet another part of the country. Before traveling in Thailand, I had never stepped foot on the Asian Continent. After crisscrossing the country over the course of the summer, I was completely enamored with the country, culture, food, and people.

Since Thailand was my only experience in Asia, I somehow imagined that all Asian countries would be similar in someways. I know that this is absolutely ridiculous, as Asian cultures are extremely varied and diverse, but a little part of my brain expected life in Japan to be similar to life in Thailand. Now that I have lived in Japan for 2 months, I still catch myself comparing it to Thailand all the time, when really Thailand and Japan are as different as Japan and the U.S. Although the comparisons are not warranted, my new home has kept Thailand on my mind all the time. It probably does not help that I have been reading Thai detective novels and some very poignant short stories about life in Thailand. It probably also does not help that I was quite set on teaching in Thailand again this summer, but the Thailand programs were cancelled due to the political unrest. 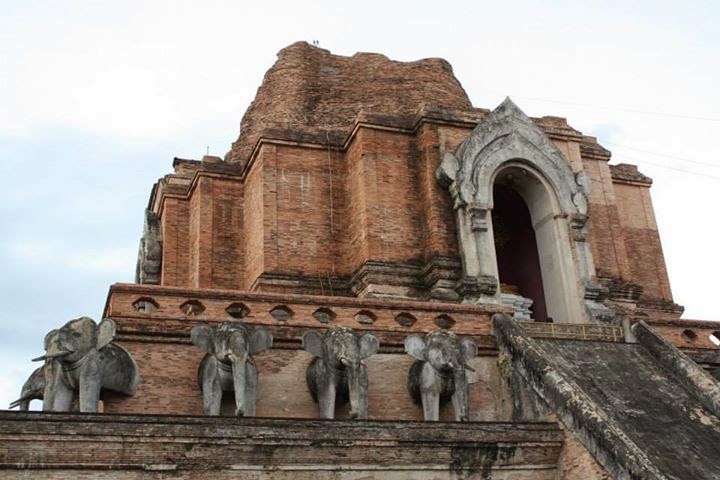 Since I absolutely cannot get Thailand off my mind, I thought I would revisit my travel journal and share some of my memories. I think the major reason that Thailand has stuck with me in a way unlike any of my other travel destinations is the mystical feeling that pervades everything in the country. In exploring Chiang Mai, my first destination last summer, I was overwhelmed by the abundance temples, or Wats, that seemed to be present on the corner of every intersection. The Wats are like compounds with a main temple, dorms, teaching spaces, and administration buildings all walled in by a high, solid wall and gates that are closed at night.  The variation in style of the Wats is as impressive as their number. Some of the temples are gilded in gold and are so shiny and luminous it is almost painful to look at them in the summer Thailand sun, while others are humble straw thatched buildings, and some are huge stone ruins that were literally built ages ago. Bustling among the buildings and statues of the Wats are men and boys of all ages dressed in flowing, deep orange robes. The monks live at the temples with no possessions. Every morning, they go out into the streets with giant bowls and collect food from whoever is willing to donate. They live completely at the mercy of the people of the community, who also donate the money that is used to build and maintain the Wats. This charitable system works because of the intense superstitious nature of the Thai people; they donate to the Wat whenever they are in need of some good luck. 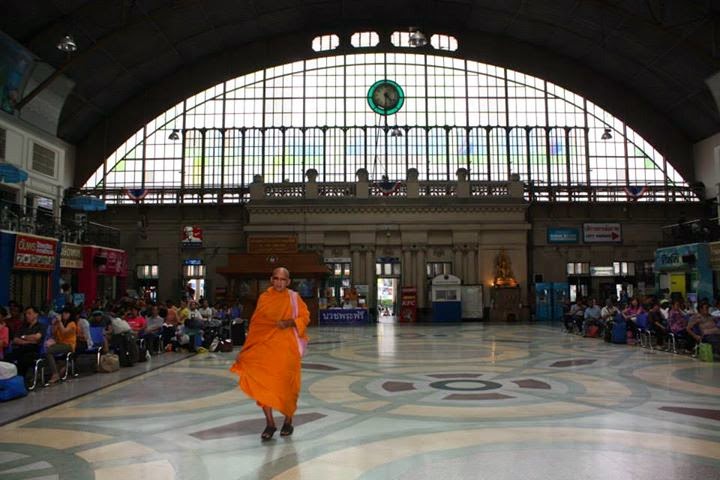 The Monks were one of the most fascinating part of Thailand. They are so peaceful, calm, and beautiful in their saffron robes. I was obviously insanely curious about their lives, their meditation, their life after monkhood - but it is not easy to talk to Monks. For one, females are not even supposed to walk next to them on the sidewalk. Proper protocol is to step off the curb, so the Monk can pass you without getting too close. One of my favorite experiences was therefore the "Monk Chat." Wat Chedi Luang, one of the biggest in Chiang Mai offers a sit and chat from 1-6pm everyday. During this time, several monks sit out in an open area and you can sit down and ask any questions that you have about Buddhism or being a Monk. The Wat is the location of the Buddhism University, so there are Monks there that visiting from many different Wats around the country. The Monks are studying Buddhism, but are also working on their English. The chat lets them practice their English and allows tourists to gain a better understanding of the religion. The monk I chatted with was very open and outgoing and was eager to answer my questions. I asked what the different shades of orange robes signified and learned that the colors represent the Wats that the Monks come from. I mentioned that I had assumed that the colors were a type of ranking system, like the number of stripes on my husbands shoulder. The Monk smiled and explained that in Buddhism there is no ranking, no castes, everyone is equal and the same. I like this idea, but there is one glaring exception: women are not allowed to be monks. The Monk's answer to this was quite interesting, but I am not sure how widely believed it is: there once were many women monks, but before the temples were built, Monks lived in the forests. Women are not as fast or strong as men, so all the women Monks were eaten by tigers and snakes. Only women Monks can teach other women Monks, so the lack of women Monks precluded any women from becoming monks in the future. I was not totally convinced by this response, but I let it go. An important note is that women can become Monk in other countries; in Chinese Buddhism, for example, women are welcome to ordain.

Another great story that the Monk relayed to me had to do with Buddha's appearance. When visiting all the Wats, I saw statues of Buddha in many different positions and I also saw fat Buddhas and skinny Buddhas. I learned that the different positions represented the different meditation positions and that there are prescribed meditation positions for all sorts of things - your birth day of the week (M,T,W,Th, F, S, Sun) is one of the most prominent. The fat and skinny Buddhas came with a rather comical tale. The skinny Buddha was a very, very handsome man, but, in order to be happy and live a pure life, he practiced celibacy. His pleasing appearance impressed the ladies and women were constantly trying to seduce him. In order to remove the temptation and live more peacefully, Buddha ate gluttonously and purposely reached obesity to keep the women at bay. This story might be slightly sexist as well, but it did make me laugh.

The superstitions of the Thai people go beyond donating food and supplies to the Buddhist monks and temples. While driving though Thailand, it is impossible to miss the vendors at every single traffic light that weave between the stopped cars to sell beautiful flowers strung together to be hung on rearview windows. When I first saw these vendors, I expected they would be ignored just like the people who walk between cars in NYC and try to wash windshields for a couple dollars. The vendors selling the flowers, however, were definitely not ignored. Practically every time I was in a car, whether taxi or airport transfer van or personal vehicle, the driver reached out the window with some money and then hung the flower garland over their rearview window. Apparently, these garlands grant drivers the necessary luck to survive driving in Thailand. And, driving in Thailand is no joke. While glancing through my journal from last summer, I stumbled upon this quote: "The most overwhelming thing, however, is crossing the road. Drivers do not yield to pedestrians and do not stop at crosswalks. There are no signs to "walk" or "don't walk." One day of walking has told me that I do not want to drive here." I did eventually drive, a motorbike at least, but I never did purchase a flower garland for luck.

Honestly, I could go on and on about Thailand forever. And I will more in the future. As much as I wish I was going back to land of smiles this summer, I am getting really excited about Fiji and teaching a course all about sharks. I am sure Fiji will be magical in its own way, It is just hard to imagine anywhere being as magical as Thailand.
Posted by Unknown at 6:03 AM No comments: