You did a great job continuing our discussion about grizzly bears today. I am posting the two clips we watched today and some of our discussion points in case you would like to review them.

Before watching this clip, I asked you to think about some of the changes in the relationship between humans and bears that may be coming about due to the increase in bear population in Yellowstone park. After the clip, we discussed whether your predictions were accurate. Some major points discussed were the bears bringing lots of tourists to the parks and people not respecting the personal space of the bears, people being irresponsible and leaving garbage at campsites, and other people working really hard to make sure that bears cannot get into garbage.


In the second clip we saw that as the bear population s expanding, bears are moving out of the park into towns in the surrounding area. Bears are not able to understand an imaginary line that says this side is protected land and this side isn't. Bears are getting into farms and killing cows and horses for food. This food source is easy and tasty for the bears, but it is really bad for the farmer. Cows and horses cost more than $1,000 each. If a bear kills 100 head of cattle, the rancher loses over $100,000. This is a lot of money. If bears are protected by the endangered species act, they are fitted with a gps collar and released when they make trouble for ranchers. We talked about whether this was right or fair and what each of us feels the right thing is to do with the bears. Several of you thought that the bears that kill cows should be killed. Junte made a point that the bear should be killed, but only after it has come back several times, in other words, it deserves a second chance. In the clip, the rancher decides to move his cattle onto different land. Most of us felt like this was the right choice. I agree. The bears were here first, after all!

Gnash got a bath!

Gnasher had a bath before school today. He pretends like he hates it, but he secretly loves it. After the bath he loves being towel dried and babied. When he gets outs of the bathroom he runs in manic circles with a huge puppy smile. Here he is still looking a bit unsure: 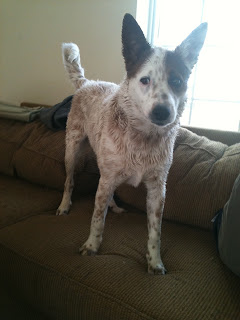 And here he is really happy and excited about being clean: 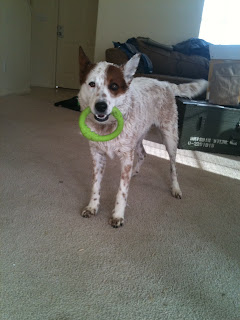