A couple of weeks ago, when it started getting really cold in New Mexico, I decided to make some vegetarian chili. I didn't use a recipe, but rather threw what I had in a pot. It could have been good, but I got distracted and burnt it pretty badly. Since then, I have been thinking about cooking up another chili, but being more attentive. Yoga Journal sends me daily emails that I read about half the time. A recent email included links to recipes from Vegetarian Times, that I clicked on. As happens when wasting time on the internet, I began clicking through the website and browsing many of their vegetarian recipes. The chili recipe that I decided to try caught my attention because it included 12oz. of dark beer. My husband and I recently brewed an oatmeal stout, and I thought a homemade chili recipe would be even more fun to make with homemade brew! (The original recipe can be found here: VegetarianTimes Chili con Tempeh)

As always, I adjusted the original recipe, and added more spice. I used two jalapenos instead of one and doubled the amount of chili powder and chili flakes. I also used Trader Joe's fire roasted canned tomatoes with green chile instead of plain canned tomatoes. Despite these changes, the chili was still very mild. So, if you like things spicy, I would suggest tripling the spicy ingredients instead of doubling. 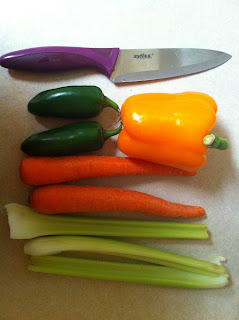 After gathering ingredients: 2 jalapeno peppers, 1 yellow pepper, 2 carrots, 3 celery stalks, 1 onion, 7 garlic cloves, 2 packages tempeh, 1 can fire roasted diced tomatoes, 1 can tomato paste, cumin, red chili powder, red chili flakes, Italian Seasoning, maple syrup, and Brisbin Oatmeal Stout, I chopped the carrots, onion, and garlic. I put aside 1 tablespoon of garlic and added the rest of the garlic with the onion and carrots to a large pot with olive oil and cooked over medium heat for about 5 minutes. 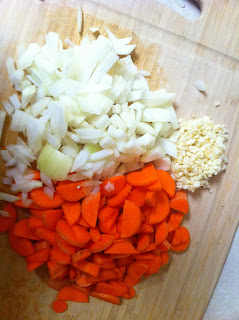 While cooking the carrots, onion, and garlic, I chopped the celery, jalapenos, and bell pepper. I added these to the cooking pot and continued to cook over medium heat for about 5 minutes more. 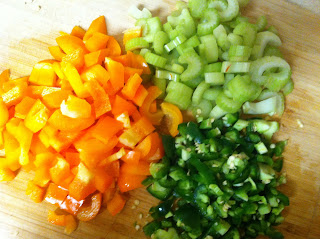 Once the vegetables were softened, I added the fire roasted diced tomatoes, tomato paste, 2 cups of water, 2 tsp cumin, 2 tsp chili powder, and 2 tsp Italian Seasoning to the veggies. I brought the mixture to a boil and then lowered to a simmer for 15 minutes. 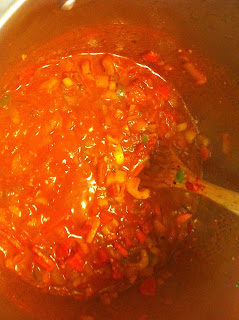 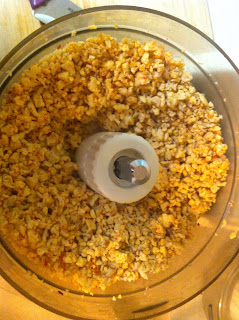 Next, I transferred the tempeh mixture to a frying pan with olive oil and cooked over medium heat until the tempeh was golden brown. 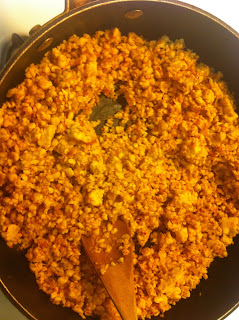 Once the tempeh was looking and smelling delicious, and the veggie and tomato mixture had simmered for 15 minutes, I transfered the tempeh into the large cooking pot with the other ingredients. I also poured a pint of our delicious oatmeal stout from the keg that lives in our refrigerator and added it to the pot. Finally, I added two tsp of Vermont Maple Syrup. 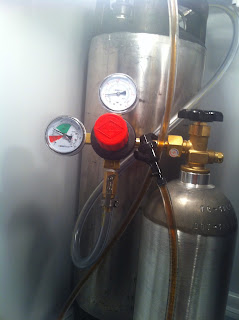 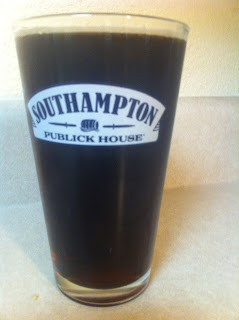 The final mixture simmered for another 15 minutes. 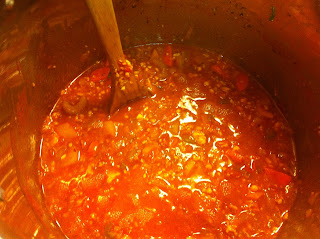 And, then it was time to enjoy! Although the final product was not as spicy as I had hoped, the flavors blended together extremely well and the crumbled tempeh added the perfect texture to a vegan chili. I had never thought to crumble tempeh before and plan to do it often in the future as a meat substitute in pasta dishes, lasagna, and soups. For anyone looking for a savory, filing, and warming vegan chili, I would recommend this recipe. 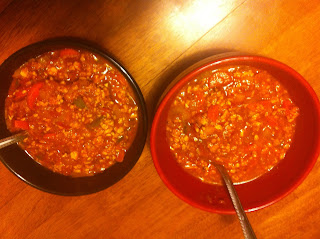