Here is a well-known personal secret: I am not a morning person. I hate waking up, and I especially hate waking up earlier than 9am. I'm not a night-owl either; I don't like staying up later than 11pm. Basically, I am a sleep person - I may like being asleep more than being awake. I really do need to sleep 10 hours a day in order to feel fully rested. This may sound absurd, but the average amount of sleep needed by adult humans is 8 hours - if 8 hours is the average, some people must need more. I need more.

The reason I bring this up is because as much as I really love to sleep, I also love to run and be otherwise productive throughout the day. Many runners love getting up before everyone else to get some miles in before most people have even rolled out of bed. I don't really enjoy this. I do occasionally have to get up early in order to fit a run into my day, but I don't like it. Here in South Georgia, I really need to start runs at sunrise or shortly after if I want to run outside. I have been waiting and hoping for the day that it would be less than 95F at mid day so I could enjoy an afternoon run. This week it has been rainy and overcast everyday, and I have been so incredibly grateful. I started a 12 mile run at 4pm on Monday and smiled throughout the whole distance, because I had been able to sleep in that morning. I have always been an afternoon and evening runner, that is just my style, and I am ecstatic to get back to my regular schedule.

The problem that comes up with afternoon and evening running, is that you will have to eat at least 1 meal before you head out for the run. My stomach is generally grumpier than the average stomach, and sometimes very bad things happen on runs when I am not careful with what I eat beforehand (think about your worst running nightmares, they have happened to me). I have found that salads and smoothies are my best choices for breakfast and lunch if I am planning a longer distance later in the day. But, sometimes I just really want something warm for breakfast, especially if it is chilly and overcast for the first time in months. This is the way I was feeling on Monday, so I started going through my cabinets looking for something that would satisfy my craving and keep my belly happy on a long run. My eyes rested on the quinoa - perfect! 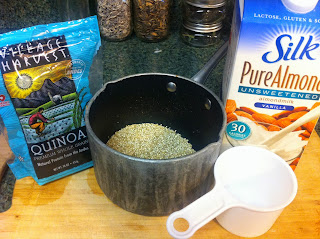 At first, I considered just making quinoa the way I normally would, which would make for a savory dish. But, really, I was in the mood for something a little sweet. I did a little googling, and found that breakfast quinoa is usually made with vanilla milk-substitute instead of water. I decided this was something worth trying. I combined a 1/4 cup of quinoa with one cup of unsweetened vanilla almond milk and a generous sprinkling of cinnamon. I let the mixture come to a boil and then lowered the heat until the mixture simmered. I kept the quinoa covered and simmering for about 15 minutes before adding chopped apples. After 5 minutes, I served myself and added a dash of cinnamon and maple syrup for presentation and sweetness. This was honestly one of the best all-day foods I have ever prepared (I had the leftovers for lunch). 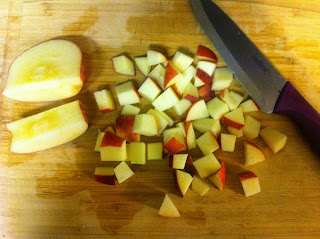 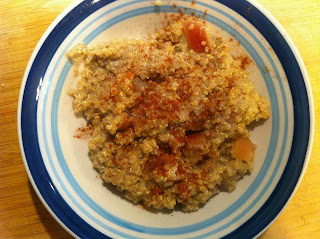 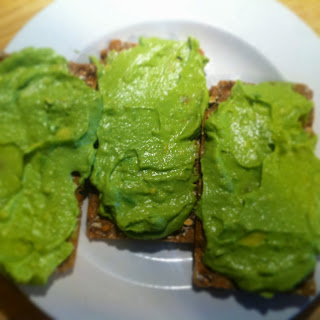 Later in the day, I was feeling like I needed a snack. This is reasonable considering I spent the day doing homework for my online climate science course and studying makes me just as hungry as running. I considered my options carefully. I knew my breakfast quinoa would be gentle on my belly - what could I snack on that would not ruin my good choice that morning? Based on what I had available, I decided to have an avocado, but I jazzed it up a bit. I put the avo in the food processor with some garlic and lime juice. I applied the avo spread to wasa whole grain crackers. The gluten in the wasa crackers may not have been the best choice, but it luckily wasn't bad enough to ruin my run.
Around 4, Gnasher and I set out for 12. It was cool, overcast, and drizzly, which made the weather as good as it gets in South Georgia. The first 6 miles went swimmingly. I had that feeling that I could run forever. At the 6 mile turn around point, I even found some stray watermelon growing at the edge of a cotton field. I bashed one open on the road and Gnasher and I enjoyed some refreshing watermelon. I hoped that this good find would rehydrate us and give us the sugar that we needed to stay energized through the rest of the run. I am notoriously bad at hydrating and fueling during runs. I love running because you really don't need anything but a pair of shoes (and many would argue you do't even need those). I resent carrying anything extra with me and would rather enjoy the freedom of heading out with just Gnasher's leash in my hand than bringing water and energy bars. I often suffer for this stubbornness, but sometimes I get lucky and find watermelons (or water fountains). I don't think Gnasher and I started feeling dehydrated until mile 9, but we still finished strong and I did not have any stomach issues (Thank Quinoa!). 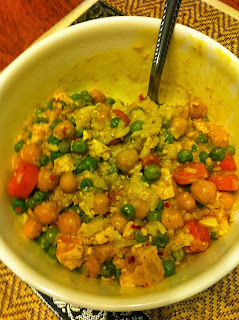 Sometimes what you eat after a run can be as important as what you eat before a run. I know 12 miles does not seem very long, but it is the longest I have ran in over a year, so I was expecting some aching and soreness the next day. Whenever I am training for a long distance race, I try to eat a good deal of spicy red pepper and turmeric for dinner on long run days. The capsaicin in chili spices reduces muscle pain and inflammation and turmeric further aids in reducing inflammation. I find that a good, spicy curry can make me feel a lot better the day after a long run than if I had pigged out on something less beneficial. For this evening's curry, I processed a white onion and 5 cloves of garlic in the food processor. I cooked the onion and garlic with coconut oil until they started to soften. For spice, I added copious amounts of cumin, curry powder, turmeric, and red cayenne pepper, and splashes and sprinkles of red pepper flakes, powdered ginger, and allspice. I let the spices simmer with the onions and garlic until my whole kitchen smelled strongly of curry. Next, I added carrots and cubed and pressed tofu. I allowed the tofu to brown a bit before adding a can of coconut milk, green peas, and chick peas that I had boiled for 10 min. After the coconut milk came to a boil, I lowered the heat to allow the curry to simmer for about 10 minutes. I poured the curry over some white jasmine rice we had left over and dug in!

I feel pretty pleased with the meals I prepared for this long run day, but I am most excited about my discovery of breakfast quinoa. I can tell that this will join the other staple dishes in my cooking repertoire. I am filing this one away in my brain, right next to raw green soup and pizza rainbows. My next long run is 14 miles on Monday and I have not yet decided if I will stick with this menu or if I will try some new pre-run meals, but I am definitely considering planting a water bottle and a larabar at the mile 7 turnaround. Here's hoping it is a miserable, chilly, overcast, and drizzly day on Monday so I can sleep all morning and head out for my run in the midafternoon!