2nd is the best

This morning, Jamie, our friend Alex, and I drove down to Belen to visit Skydive NM again. There was a special event at the drop zone and the club had hired a C47 or a DC3 (same thing) so that a large group of licensed skydivers could all jump at the same time. Alex was interested in jumping civilian style from a large plane, Jamie has a broken foot, and I was planning on performing my second IAD jump and completing category A, stepping a little closer to becoming a licensed skydiver myself. Now that I have visited the DZ a couple times,I am beginning to get a better understanding of sky diving culture; there is a lot of waiting around, but it is totally worth it! Unfortunately for Jamie, his whole day was waiting around, but I think that he enjoys chatting with all the skydivers and being a part of the club-like atmosphere that definitely pervades the hangers and office at the DZ.

Last time I jumped, my FJC (first jump course) instructor, Shamus, told me to give him a heads up when I was ready to do my next jump. I sent him a text earlier this week, asking if Sunday would work. He replied by letting me know about the big plane coming in, and advised me to come at about 8 so that there would be instructors available. Jamie, Alex, and I should up a little after 8. Alex signed up for the first jump load on the C47, everyone teased Jamie about breaking his foot playing frisbee instead of skydiving, and no one knew I was planning on doing my second jump that morning. But, that was totally ok; JC, an instructor, paired me up with an instructor named Jimmy while he prepped students that would be completing their first jump. Jimmy reviewed some of the basics with me and quizzed me on the sequence of events in the jump and some emergency procedures. We practiced climbing out of a parked plane again and I got strung up in the hanging harness to practice checking my canopy. The first time that I practiced cutting away and pulling my reserve, I fumbled for my cutaway handle and I asked to repeat the skill, making sure that I would be able to respond in an emergency. I was also a little rusty remembering all the new facts I had learned 3 weeks before, but after about an hour and a half, I was ready to jump again.

The DZ was kind of a mess with all the excitement of the special large plane. There were way more people than I had seen there before and everyone was buzzing about formations and tricks they were planning for the big group drop. There was even a 16 person formation being planned. Because of this, it took a while to get student gear together for me and for the other student and I to get into the Cessna that would be taking us to our jump altitudes. The jump would have a slightly different plan this time. Alan (who would be on the radio helping me direct to the landing area) would jump first at 4000', then I would jump at 5500', and finally Kristen (a more advanced student) and JC would jump from about 10,000'. I was a little bummed that Rudi would not be on the radio for me again, but Alan was clear and safe, as well. After Alan left the aircraft, I knew I would be next and expected to feel nervousness deep in my belly, but it did not come. Instead of being nervous and scared, I was excited and as we got closer and closer to the time to open the door for me, I just got more and more excited. Apparently I wore my emotions on my face, because JC told Jamie afterwards that my smile got bigger and bigger as it got closer to jump time.

Finally, it was time to go. JC told me to put my feet out and stop, I heard him say "I have your pilot chute," I responded "you have my pilot chute!," and he told me to "climb out." It was much easier to climb out on my second jump and sliding my hands out towards the wing and stepping off the wheel to a hanging position did not scare me numb as it had previously. Then JC said "go." I hesitated a second and then let go, looking up at JC and the plane the whole time. I held eye contact and body position, and even remembered to count out 4 seconds before checking my canopy. I remember the entire exit, unlike last time which was an adrenaline fueled blur. I think being more present and aware made the experience more fun, even though the adrenaline rush of the first jump was incredible in its own way. My canopy opened fine, I did a controllability check, and located the landing zone. Again, I had trouble determining the winds and planning my own landing pattern, but Alan talked me down, and I landed softly on my feet. I remembered to stow my brakes and daisy chain my risers and stuff the slider through the last loop of the daisy chain. I wasn't shaking uncontrollably, and I was fully able to perform these tasks and then gather up my chute and walk to the van.

I was advanced to category B after debriefing my jump and again, I cannot wait for my next jump, although for a different reason this time. Last solo jump, the rush of doing something so surreal and terrifying was overwhelming and amazing and I was looking forward to that feeling again. Now that I have gained a little more confidence and control of my physiological response, I want to perform. I want to practice, and become really skilled at skydiving. I am really looking forward to free falling with Jamie, when his foot is healed, of course. 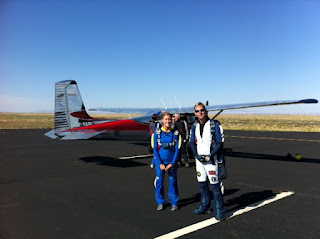 Here I am with Alan (my landing coach) and the small Cessna we jump from. 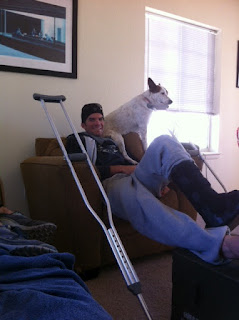 Gnasher perching on Jamie, bringing a smile despite the big black boot.
Posted by Unknown at 9:16 PM 1 comment: