As proclaimed, I headed to the Valdosta Farm Days downtown grower's market this Saturday set to buy all the tomatoes available and can like mad. Strangely, it seemed my friends and I were the only people in town interested in the market this week. Almost none of the usual vendors had showed up and the town square was a ghost town! Only one vendor had any produce at all, and when it was my turn in line, there were only 5 tomatoes left. You know it is a strange day when there are not even onions or collards available at a growers market in southern Georgia! So, I bought my five tomatoes, along with some zucchini, peaches, cucumbers, a baking pumpkin, and local pork and venison sausages. It was better than nothing and I figured it was good to start small.

After being let down by the market, there was plenty of morning left, so we went searching for a local produce store we had heard rumors of: Carter's Market Produce and Meats. This store is like an organic and local food oasis in the Wal-Mart driven food desert of Southern Georgia. As I walked in, I immediately felt gratitude and excitement. There were some favorites like Rudi's organic bread, Bragg's apple cider vinegar, and Justin's Almond Butter that I had not been able to find here, but there was also a plethora of local organic zucchini, pumpkins, onions, tomatoes, meats, eggs (!!!), and cheeses. In addition, there was local honey, local olive oil, and locally roasted coffee. I am beyond ecstatic to have found this market! 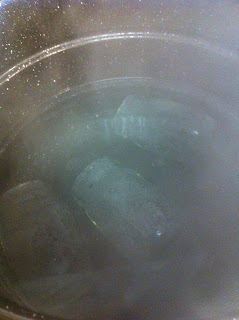 In a moment of self-doubt, I decided to stick with the five tomatoes I had already bought (what if I made gallons of sauce that tasted terrible or went bad?). I had originally planned to use Barbara Kingsolver's family tomato sauce recipe from her book Animal, Vegetable, Miracle, but her recipe calls for 30 lbs of tomatoes! My tomato cache weighed closer to 2.5 lbs, so I worked from several recipes I found on the internet along side Kingsolver's suggestions.

The first step in canning my own tomato sauce was to sterilize the canning jars and lids. There are several ways to do this: boiling them, running them through the dishwasher, or using a sterilizing solution. We use iodophor to sterilize everything when brewing beer and I assume that this would work for canning as well, but I could not find any sites recommending it, so I stuck to the traditional boiling for now. In the future, I think I will use the iodophor, it is much quicker and uses less energy (does not need to be heated).

Next up, the tomatoes needed to lose their skins and seeds. I found a site that suggested cutting an x on the bottom of the fruit and blanching them (dropping them in boiling water for 30 seconds and then in ice water for 30 seconds). I kind of couldn't believe how well this worked; the skins literally fell right off the tomatoes. Next, I cut them in wedges and pushed the seeds out and into my countertop compost container; turns out, canning preserves food and gives back to the soil. I chopped the tomatoes up a bit - how finely you chop them is a personal preference - and the tomatoes were ready for the pot. 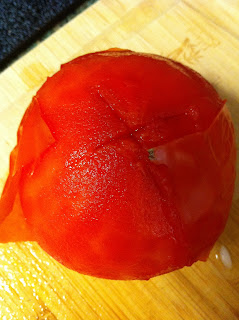 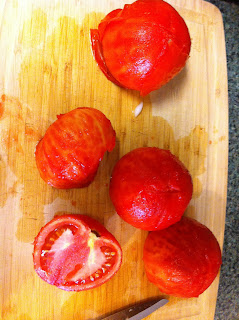 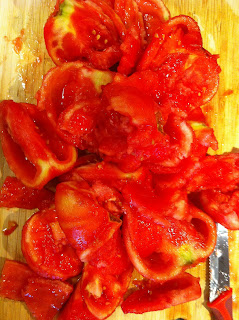 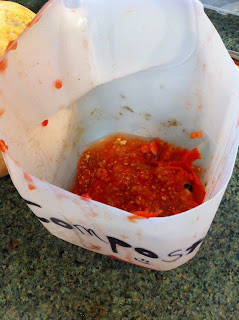 Before I cooked the tomatoes, I softened some chopped onion with just a tiny bit of water in the bottom of a large pot. Once the onions were soft, I added the tomatoes to the pot, sprinkled in salt, pepper, garlic powder, thyme, cinnamon, and nutmeg. I brought the tomatoes to a boil, lowered to a simmer, and left for about 40 minutes, stirring occasionally. I have to admit, I was surprised how much water came from the tomatoes; when I read instructions to let the tomatoes reach a boil, I really thought it would be necessary to add water. As the sauce was approaching completion, I opened the sterilized jars just long enough to add 1/4 teaspoon of citric acid to each jar. When the sauce was done cooking, I ladled it into the sterilized pint jars with the citric acid and quickly covered them with the lids. I ended up only filling 2 pint jars with sauce, but there was some left over that Jamie and I gobbled up with a spoon as a sort of tomato soup. I was impressed; the sauce tasted really good at this point - the nutmeg and cinnamon brought just a tad of sweetness to a traditionally more savory flavor.

Finally, I put my two jars of tomato sauce in the giant enamel pot that we use for brewing, and filled it with enough water to cover the jars by one inch when they were standing up. Once the water reached a rolling boil, I started a timer for 35 minutes. I have to admit, I did stare at the the jars intermittently. Part of me was sure they were going to explode, but tiny air bubbles were released from the inner rim of the screw on ring relieving the pressure inside the jars. It was probably more than a little wasteful to boil that much water for two measly pint jars, but it was an experiment! In the future, I will do much larger batches at a time. Look out friends and family, jarred goods are coming your way for the holidays this year! After what seemed like forever, my timer went off and I pulled the two jars out of the boiling water and set them to cool on the counter top. Their tops were vacuumed down strongly and they were sealed shut! It had worked. My two beautiful jars are in my pantry right now, waiting for a future pasta night! 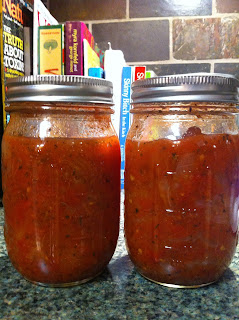 After finishing this project, I was feeling quite prideful. Canning was simple and straightforward, but it was something that I never did before and never really expected to do. I did not grow up in a canning household. In fact, this was the first time I even made tomato sauce from scratch. Usually, I cook onions and garlic in olive oil and then add carrots and some other veggies like zucchini or whatever we have, pour in a jar of store bought sauce, and finally stir in some spinach until it wilts - voila! tomato sauce! Despite everything that I add to it, my recipe relies on a $3.50 jar of Newman's own sauce. I just can't believe how easy and affordable it is to make my own jars of tomato sauce. And, in doing so, I am supporting local farmers and decreasing the carbon footprint of my meal. I have the canning bug now; I want to can everything!
Posted by Unknown at 12:51 PM No comments: