A couple weeks ago, a teacher friend of mine noticed that the pit bull puppy that was living under a portable classroom building was getting much skinnier as the weather cooled. She decided that the dog really couldn't stay there and called animal control. This was a hard decision, because stray pits generally meet a pretty deadly end when animal control picks them up. Luckily, an amazing organization, Second Chance Shelter, took the pup in. This shelter is run completely by volunteers and donations and helps older dogs and unwanted breeds find homes and gives them enough time to find the best home, unlike other shelters. My friend posted pictures of this pit bull pup looking for foster parents or a permanent home for the puppy. She was absolutely adorable, and she got a full time home almost immediately with one of the other teachers at the school, but it made me think about fostering.

My biological father and I don't have a relationship anymore. When my parents started their divorce, I was in kindergarten. We all lived in the same house for two more years, until my mom finally took us and moved to a rental house an hour away from my dad and the house I grew up in. Promptly after we moved out, my dad's mistress moved in, with her chihuahuas and her marmosets. Yes, my future step mother had several monkeys. Which, obviously made her pretty cool in my kindergarten head. She was also about 27 (I think?), wore trendy clothing, and was a cyclist and raced with my dad. I always had an obsession with animals and owning them. I fantasized endlessly about having a farm or living in Africa with giraffes in my backyard or having a dolphin best-friend. My mother hated animals and had no interest in having them in our house. She tolerated a house cat, but we would never have a dog or a monkey. As my mother got older, she developed a debilitating fear of dogs and literally freaks out when a dog comes near her. This divide between my parents in their attitudes towards animals played a large influence in which parent I preferred. I preferred my dad. I wanted his attention and I wanted to hang at his house, which was steadily turning into a zoo. My stepmother purchased a breeding pair of marmosets and a golden tamarin. My dad built a menagerie for the growing monkey population at our house.

Then, they started fostering litters of puppies that were too young to be adopted yet. There were actual baby puppies at my dad's house. The weekend could not come fast enough! The first litter was german shepherd puppies and My dad ended up keeping one of them- Shelby. They waited until Shelby was full grown before they fostered another litter, but this litter was even cuter, if not pure breeds. Again, my dad kept one of the puppies. I thought that this charitable act that supplied me with a constant houseful of puppies was the most amazing thing on the planet. I begged my mom to foster puppies, too, but she could not even consider the idea.

When I finally reached high school, I still loved puppies, but I also loved driving around with my friends on the weekends, cheerleading, football games, and working in the restaurant where I bussed tables. I began skipping weekends at my dads house and our relationship was beginning to unravel. At the same time, my step-mom had her second daughter and began pushing much more aggressively for my father to sever ties with my brother and I. I think she was bitter about being a second wife and resentful towards my father's previous life. She certainly wanted her family to be the first family and for all of my father's resources to directed towards her children. She began telling me that her family was going to move to California and that I would never see my father again. They never moved to California, but I haven't seen my father since high school. At some point my dad came up with the idea that my minor acts of rebellion in high school meant that I was a disgrace to the family. He stopped calling and I was no longer invited to their house.

For the last year of high school, I felt that my impeccable grades and my extracurricular activities while holding down a job and paying my own car insurance would surely convince my dad that I was not a disgrace. I hoped he would find out that I was ranked 9th in my class of 300 or that I received a full academic scholarship to the university I was accepted into. My mom still talked to him about financial things and whenever she did, I was always curious if he asked about me or if he seemed impressed that my college bills were so low. I finished my first year of college with a 4.0 and volunteered with St. Vincent de Paul Society, was a Big Sister, a mentor, and visited a children's hospital weekly. Maybe this would convince my dad I was worthwhile? My brother and I called him on Christmas and left him a voicemail wishing him happy holidays and letting him know that we missed him. We never heard back. Despite this, I continued to do things with the hope that my dad would hear about them and think that I was not a failure. Oh, Maggi finished graduate school? Oh, Maggi traveled the world? Oh, Maggi got married? Surely he would hear these things, change his mind about me, and reach out to me. We would have a tearful reunion and forgive each other and have a wonderful relationship for ever more.

When I saw the puppy on my friends facebook page, looking adorable and needing a place to stay, the part of me that wants to convince my father that I am a worthwhile human being woke up. I thought, my dad would be so proud to know that now that I am an adult, I am fostering pups too. I also have a very soft spot for pit bulls and know that they can be the absolute sweetest, despite their reputation. I really did actually want to help the dog. I contacted the woman running the shelter and let her know Jamie and I were interested in helping. Soon after, she came by the house with two potential foster dogs to meet Gnasher. One, Charlie (a brown and white pit), really stuck out as sweet and special. She was so nervous to come in our house and was scared of Gnash at first. Gnash barked in her face, like he does to all dogs that won't play with him, and she cowered and hid behind the daughter of the shelter volunteer. Then all of a sudden, she relaxed and started playing with Gnash. They wrestled and played and seemed to get on magically. Charlie stayed at our house that night and in the morning we took her to the vet to get a shot for her tapeworms. She pooped out tapeworms for the rest of the day, but remained sweet, gentle, and tolerant of Gnasher's constant harassing. We took her to the dogpark yesterday and she acted rather aggressively, which was unnerving, but not all dogs are dog park dogs. Overall, she has been a pleasure to have these last couple days and I think we will all miss her in our own ways when she finds a permanent home. I will however, be grateful to only have one dog again. I certainly didn't expect it to be so much extra work to have an extra dog. And, I miss the way Gnash behaves when it is just us.

Today, Jamie and I had a SCUBA class that lasted all day. We didn't want to leave the dogs crated for as long as we knew we were going to be out of the house, so we left Gnash inside, and we left Charlie in our small, but bigger than a crate, backyard. When we got home, Charlie was gone. Apparently she had jumped our 6' fence, jumped into a neighbor's yard (same fence), and jumped back out of the neighbor's yard. Eventually, someone thankfully took her in and did not call the pound. These nice people were so smitten by her, they may actually adopt her. The thought of her leaving makes me a little sad, but it would certainly be nice if she was only 2 houses down and we could still see her from time to time. When I walked into the house and realized she was gone, my heart dropped and I felt like I had let her down as well as the shelter, myself, jamie, and in some weird twisted way, my dad. I know that my dad will never know about my efforts to help this dog, nor would he care. As much as this experience has taught me that one dog really is enough, it has also been another lesson in having honest motives and truly doing things for the right reason. Someday, I will grow out of trying to impress my father, but probably not for some time yet. 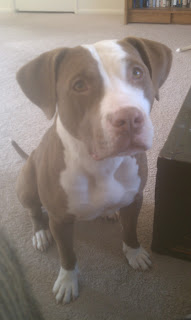 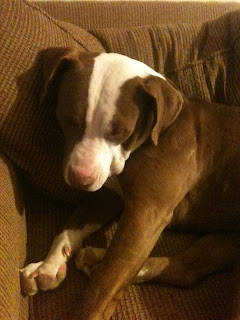