I have made these enchiladas a couple times now and I swear that they are better every time I make them. I made them again last night and they were so good, I think it is finally time to write a blog about them. These enchiladas are surprisingly easy to make and honestly delicious: another vegan recipe that meat eaters will enjoy and appreciate. This time, I got most of my ingredients at Trader Joe's and it turned out being quite an inexpensive dinner, as well. 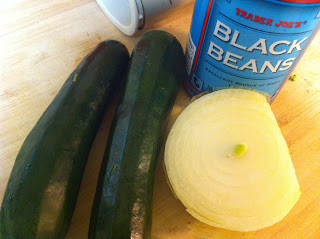 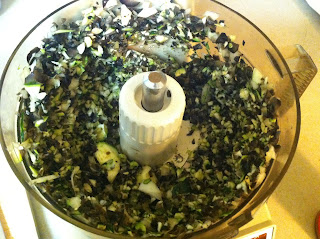 After noisily pulsing, I transferred the mixture from the food processor to a large mixing bowl. I drained a block of organic extra firm tofu and cut it into cubes. The cubes were added to the mixing bowl and mashed up with a mixing spoon. I tried to have the tofu mix evenly with the olives, onions, beans, and zucchini. On previous enchilada nights, I added the tofu to the food processor, but it had became too pureed and the texture was not right. Mashing the tofu and stirring it in created a much nicer texture and made the final product much more pleasing. 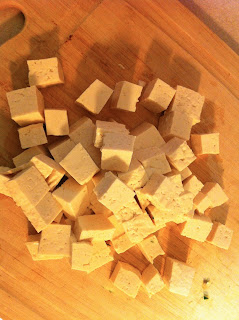 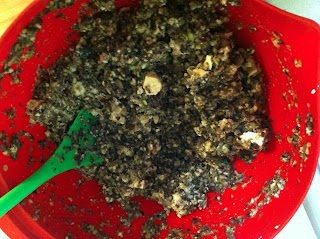 Next, I added enchilada sauce and equal parts water to the mixture and stirred well. I used half my bottle of enchilada sauce here, so I added water to the bottle until it was full again for the sauce that gets poured on top of the tortillas. I scooped generous amounts of the filling onto each tortilla, evenly spread it out, and rolled the tortilla up. I only had 6 tortillas (I should have bought two bags!), so I was trying to use as much of the filling as possible, but adding plentiful amounts of filling also made this dish better than previous times I had made it. 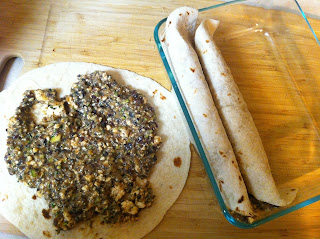 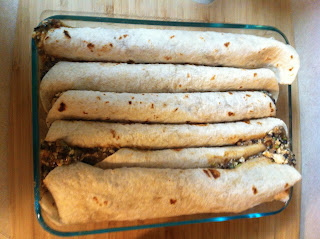 One of my husbands friends had broken my full-sized pyrex dish this week, so I had to really cram the enchiladas into a smaller pyrex dish. Luckily, tt ended up not mattering much. I poured as much of the 50:50 enchilada sauce/water mixture into the dish as would fit, and topped the tortillas with cubed Daiya jack-style cheese wedge. I had used the shredded Daiya before, but this is what I had this time, and it was so, so much better. 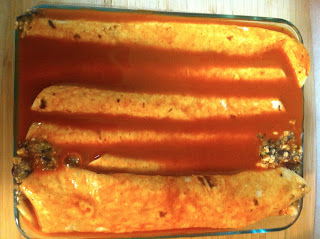 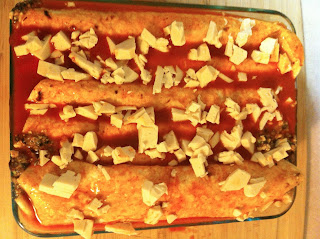 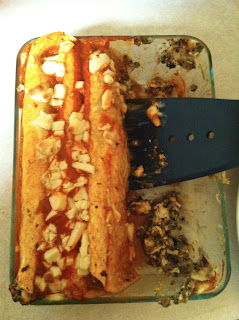 These enchiladas are quick, easy, cheap, delicious, and full of healthy choices for you and the environment. I hope you enjoy them as much as we did!

Posted by Unknown at 9:13 PM No comments: