I have lived in New Mexico for a year and a half, I have worked in green chile fields, I have roasted green chiles, and I have added them to many recipes, but until last night, I had yet to try to make my own green chile sauce. As I sit here eating eggs with rice and green chile sauce, I am so glad that I finally took the initiative and pulled out a bag of frozen green chiles from the freezer. I let it defrost all day and when it was finally time to make dinner, I opened up the zip-lock freezer bag and the aroma of roasting green chiles came rushing out. I was immediately nostalgic for days spent packing freshly roasted green chiles into 1 lb. freezer lock bags. I even thought fondly of harvest days spent hunched over chile plants, though significantly less so than roasting days.

I used a recipe I found online as guidance during my first green chile sauce attempt ("Traditional-Style New Mexico Green Chile Sauce" from Food.com), but I made several deliberate changes and a couple based on available ingredients. I diced a huge clove of elephant garlic and put aside a tablespoon for the rest of the dinner. I put the majority of the garlic clove (this clove was seriously giant) in a medium sauce pan with olive oil over medium heat and cooked the garlic until it was soft. I then added two table spoons of whole wheat flour, a teaspoon of cumin, and sprinkled in a lot of salt and pepper (I accidentally added quite a bit more salt than I intended to). I continued to cook these ingredients for about two minutes. Next, I added 2 cups of water and a vegan boullion cube. I stirred the ingredients, encouraging the boullion to dissolve, brought the mixture up to a boil and then lowered it to a simmer. While the broth was simmering, I peeled the skin from the chiles and removed the stems. At first, this task was rather unpleasant since the skin kept sticking to me and the chiles, but then I pulled the skin from chiles under a a light stream of warm water and suddenly it was easy. Once all the chiles were stemless and skinless, I sliced them into thin rings and dropped them into the broth with some "Italian Seasoning," which is essentially thyme and oregano. The whole sauce simmered for about ten more minutes. The major deviations from the "traditional recipe" were: no onions, 4x as much cumin, veggie boullion instead of pork stock, and Italian Seasoning instead of just oregano.

We ate the green chile sauce over chorizo with elephant garlic, spinach, and white rice. I have to say that the green chile sauce was the best part. It was so good, I literally ate the sauce with a spoon. Later in the evening when we were watching Breaking Bad (it was a very New Mexico evening), I was craving the chile sauce so badly I had to grab another spoonful as a snack. This morning, I piled it on my eggs and rice. I think this homemade sauce is going to replace sriracha in my life (at least for a while). I only have 1.5 lb. of green chile left in the freezer and so many green chile dishes I would still love to try. Green chile really is a treasure. 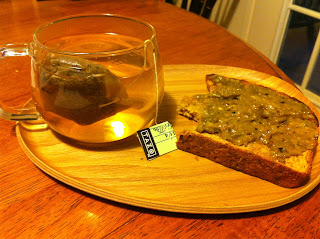 Green Chile Sauce on Toast and Green Tea, on my new Fika set.