My rocky relationship with running

I have had an on again, off again relationship with running since high school. If I am honest, our relationship started even before that. It is like when you hear a couple talking about their first kiss being in kindergarten and then teasing and bullying each other until high school, when they realized they were really in love. In 1st grade, I beat all the other kids in relay races in the parking lot of my Catholic school. Once in public school in 3rd grade, I beat the other girls in the 800m on field day. In 4th and 5th grade, I was the fastest girl in my class and was selected to run a special cross country event in a near by county park. I really loved running, it felt great, it was fun, and it gave me something to be proud of. Other girls started joining extra-curricular cross country teams, but I did not; I chose to join a gymnastics team instead. I think that decision was what first put my relationship with running on the rocks.

In middle school, I was practicing with my gymnastics team 9 hours a week and in 7th grade, when students are allowed to participate in intermural, I added 6 hours of cheerleading in the fall and winter seasons. When Spring track rolled around, I was exhausted and more interested in going home after school. Occasionally, I would run around the block, but I didn't really keep up any level of running fitness. My natural running abilities lay undeveloped and unused until I was in high school when I signed up for Varsity track.

Once on the track team, my delight in running was rekindled, but I felt frustrated that I could not keep up with the other girls. True, everyone else ran cross country in the fall and winter track in the winter, while I was cheerleading, but I desperately wanted to be a star on the team. I ran the 400m and 400m hurdles mostly because everyone else hated those races and I usually could at least place and get points for the team. I jumped high jump because I could use my gymnastics training in that event, and was actually good at it. To tumble, one must jump straight up and then perform a maneuver at the highest point, which is also true for high jump. It is necessary to jump up first, then arch over the pole. I always scored in high jump and jumped quite high for a very short girl. But, I wanted to run fast! Now, when I look back at my times, I can't believe how fast I actually was. Time certainly helps one appreciate the gifts of youth.

As an undergraduate, I officially broke up with running and we were never, never, ever getting back together (except for a few flings here and there). I was focused on studying and partying and certainly wasn't fast enough to run college track. I missed the feeling of being on a team, though. I also missed work-outs facilitated by a coach; I am not the type of person to push myself, and will not work out until I am too sore to walk, unless someone is aggressively encouraging me. But, whenever I did decide I needed to get some exercise, I hit the track or the treadmill. I continued to feel that running was the only real workout and the best way to exercise. I just couldn't commit, and I only exercised about once every three months.

After my undergraduate degree, I found myself really enjoying bicycling. I was interested in the green movement, and liked the idea of biking instead of driving. Also, my car at the time was really unpleasant to drive. I rode my bicycle most places I went, and even rode back and forth the the restaurant where I worked about 15 miles from my home. Cycling 30 miles a day did improve my fitness, even if I still thought bicycling was a rather lame form of cardiovascular exercise. Eventually, a friend suggested I start running again, and I did. I started with a mile, then 2, then 3, and eventually I ran 5 miles in a row. That same friend suggested I sign up for a half-marathon just a couple months later, and I did. Two weeks before the race, I ran twelve miles along Dune Road. I remember meeting a friend who was driving down the road on the way to the beach. I told her, "If I stop to talk now, I will never start again!"

The Queens half marathon that fall of 2009 was an amazing race. The course was beautiful, the weather was perfect, and I finished! I do not remember what my time was, just the flowers and water views. After that, I was hooked for the next 2 years. I joined New York Road Runners and subscribed to Runner's World. I read about running and training techniques. I ran races in the city on the weekends and ran a couple small time 5ks near my parents' house. I joined Team In Training and ran my first full marathon in San Diego. I ran enough NYRR races to qualify for the NYC marathon and finished NYC in 4:09. The NYC marathon was one of the proudest days of my life.

Once I had achieved my graduate degree, I moved away from New York, and since then it has been difficult to find the same joy in running. I learned to love running in NY and places with different weather or terrain don't make the activity more enjoyable, despite what one might think. Last year, I ran the Nashville marathon and did all my training where I now live in Albuquerque. I had some IT band issues and many of my long runs were thwarted. I finished in Nashville, but my time was a huge disappointment. After the race, I came home and ran some smaller races. I ran my fastest 10k and 5k that I had since high school and was just starting to enjoy running again. And then I went away for the summer.

I lived on a sailboat this last summer. Running was impossible. The fitness I built up simply atrophied. When I got back to ABQ, the altitude and full time farming left me exhausted. Since then, I have been trying to rekindle my relationship with running. I thought signing up for a 5k might get me on track, but it didn't and I simply skipped the race. A friend of mine bought two pairs of Nike Frees in the wrong size. She purchased them from the employee store, so she could not return them, and offered to send them to me. I thought new sneakers would surely give me a kick to my step and help me hit the pavement with enthusiasm. I look cool with neon shoes, but I am not fast.

I feel like I am now courting running and running is the one who is rebuffing me. I just can't get fast or really enjoy running right now. I am sure that running and I are not truly divorcing, but right now I think it is safe to say that running is not answering my text messages. 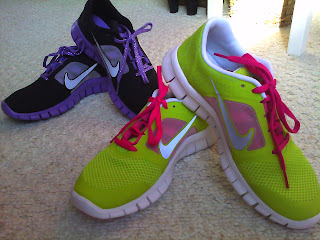 Posted by Unknown at 6:47 PM No comments: