It is Sunday evening of thanksgiving weekend, which means the fun is just about over, but this has been a truly lovely thanksgiving break. Thanksgiving started with Gnasher and I taking a nice 45 min. run through a delightfully quiet and seemingly empty Kirtland AFB. Gnash now knows that if the park is empty when we get there, he gets to run off leash, which is pretty much his favorite thing. Holiday luck shined on him and he got a full mile of off leash frolicking. I then went to a holiday yoga class at Nishtha yoga. Dharmashakti, my teacher from teacher training, did an amazing job crafting a creative class that challenged everyone; it was impressive how he was able to cater to such a diverse group of students. He even provided chair yoga modifications for one participant. When I got home, the cooking began. I made a vegan apple crisp, my tofurkey, and vegan mashed potatoes. Jamie made pumpkin pie and stuffing. A fried of ours also worked in our kitchen and made his own stuffing and mashed potatoes.

My tofurkey was absolutely a winner (meaning it was better than last year's). The texture and taste of the Trader Joe's tofurkey was noticeably superior to the brand name tofurkey, but the vegetables and herbs I had access to through my CSA this year were also of much higher quality than the veggies I have used in years passed. I helped grow the turnips, carrots, and garlic on the farm and my herbs, celery, and sweet potatoes came from regional organic growers that participate in our CSA. I really think that local, fresh, organic vegetables taste better. And the response to my roasted vegetables was even more enthusiastic this year. There was so much food at the party we went to, it was a little overwhelming. There were 4 dishes of stuffing and something like 6 pumpkin pies. We ate buffet style and found a place to sit and eat, which was not at a table for most. I missed the thanksgiving tradition of eating at a table and passing around dishes. I also missed some of my favorite thanksgiving foods, like pilsbury crescent rolls, but I certainly did not go hungry. Not everyone was inclined to try the tofurkey (there were 2 turkeys, 2 hams, and several ducks also available), but several people did sample it and at the end of the evening all of the roasted veggies had been scooped up, leaving a lonely half tofurkey in the roasting tin to be taken home for leftovers. 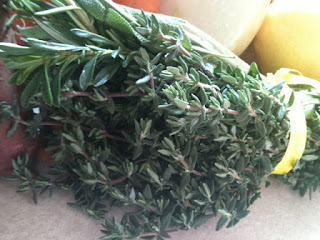 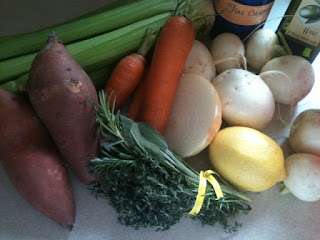 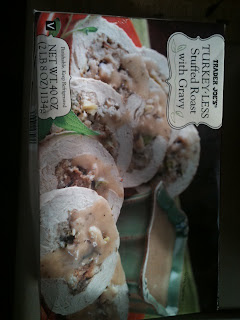 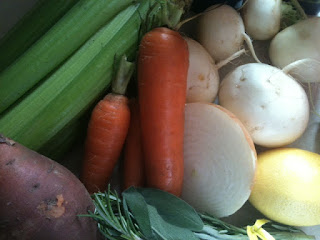 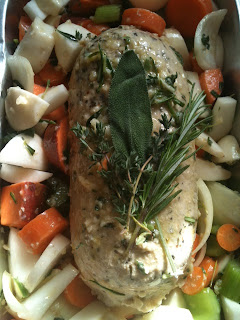 One thing to note about TJ's tofurkey: the included gravy is downright gross, If I had sampled it, I would have tried to make my own vegan gravy.

Another thanksgiving winner was the apple crisp, for which I deserve very little credit. I used Isa Chandra's recipe from the Post Punk Kitchen web site (http://www.theppk.com/2007/10/apple-crisp). I tried not to change anything, although I did use fuji apples instead of roma, because the local orchard that provides tree fruit to the CSA gave fuji apples in the box this week. The apples tasted fine, actually fine is an understatement, so for future crisps, know that fuji apples are an admirable stand-in. Pretty much every recipe of Isa's that I have tried has always been amazingly delicious and this apple crisp stays true to that track-record. If you like to cook vegan, but have not yet learned of the post punk kitchen and the several books that they have published, hop right on board, you won't be disappointed.

Food always plays an important part in thanksgiving weekend, but having time off and doing what I enjoy is just as important. On Saturday, I jumped from 10,000ft and practiced 180's and 360's and then had my first stand-up landing without coaching. Today, a friend and I went to a full primary series class and then met up with Jamie and her boyfriend at The Grove, for the best breakfast ever. Jamie and I just got back from seeing Lincoln, which was hugely entertaining. As someone that generally gets bored in movies, this movie held my interest from beginning to end. And now that I have a full belly of thanksgiving leftovers, I will be going to bed thinking about returning to the classroom tomorrow. I am thankful for this thanksgiving weekend and am already looking forward to next years (a little). 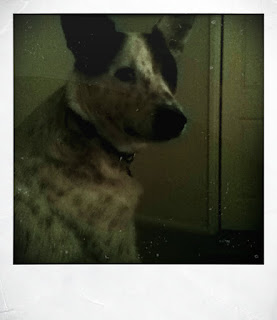