Friday class started with 20 minutes to complete a math challenge. The winner will be announced later on the blog and in class!
After the math challenge, the students were challenged in a different way. "Build the Tower" is an initiative that involves team-work, problem solving, cooperation, and collaboration. I built a tower out of construction paper, tape, paper cups, and popsicle sticks and kept it hidden behind a tri-fold. The students were divided into three groups and each group chose one representative to look at the tower. The representative looked at the tower for about 30 seconds, was given a envelop full of supplies, and went back to their group to build an exact replica of my tower. My tower was made out of:
Group 1 received:
Group 2 received:
And, group 3 received: Together, the groups had enough supplies to build three towers that were identical to mine, but on their own, it was impossible for any one group to build a tower just like mine. The groups worked for a while and quickly figured out they did not have enough supplies to build the tower. Two groups decided to cooperate, but together could only build one complete tower. Despite not building three towers identical to mine, the students learned some lessons about communication, listening, and teamwork. During discussion, some great points were made about cooperation and collaboration. Aminata pointed out that some countries have some resources but may lack others, while another country may have what that country needs, but is lacking something else. In order for people to stay fed and comfortable, countries need to trade and work together. Another student pointed out that this is necessary, even if the countries don't agree about everything or like eachother. Mohammad Shaikh brought up the point that for a technology company to build something like a computer or a cellular phone, they need to purchase technology plans and parts from other technology companies. Mahmmud said that the one student in each group that was able to see the original tower was kind of like the teacher and the other students needed to listen and follow instructions in order to learn and be successful. I can't wait to do more problem-solving and team building with the middle school! 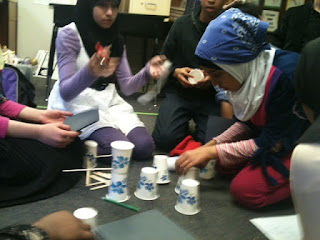 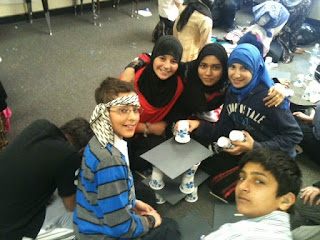 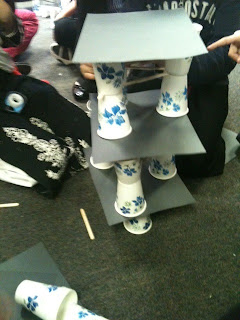