While staying in Chang Mai, I encountered beautiful, intelligent beings living in captivity in two separate and very different circumstances. The first was at the Chang Mai Women's prison and the second was at an elephant riding attraction. It may not be completely correct to compare humans and elephants living in captivity, but the two experiences evoked similar emotions and stimulated significant consideration and contemplation.

I visited the women's prison on my first day in Chang Mai, and really my first true day in Thailand. I was still adjusting to the climate and was fairly jet lagged, so I was exploring the city in a bit of a fog. I read in Lonely Planet that the prison has a progressive vocational training program that aids in the transition from prison to freedom. Before release, inmates are taught Thai massage from a prestigious local school along with other handicraft skills. The women then perform massages for tourists and sell their crafts at a very pleasant facility across the street from the prison. They receive a portion of the proceeds, which they can save so they are not completely broke upon their release.

When I arrived at the massage and craft center, I walked through a garden to a reception area and made a massage reservation with the female prison guard at the front desk. There was a two hour wait for a massage, so I sat at a table in the garden and ordered lunch. Pad Thai and a coconut smoothie were delivered promptly and as I sat enjoying my lunch, I also enjoyed the many native plants and sculptures that adorned the garden. The ground was covered in decorative brick work and above me was a thick canopy of green trees with orchids growing on their trunks. This setting surely did not feel like a prison. The only reminders that I was on the property of a prison were signs with pretty script spelling out "Prison Products," where there were soaps, change purses, and small dolls on display for sale, and of course the prison guards.

I was impressed even further when my number for a massage came up. I left my shoes outside and slipped on complimentary slippers. Once I was shoeless, I was led inside by the guard and given a set of scrubs to change in to in the bathroom. This was fairly comical because I was given size XXXL bottoms, but I tied them on tight and was led to a sitting area to wait to have my feet washed. The prison guard went back to attend to another guest outside and I was now in the care of the prisoners.

All of the prisoners were young and pretty with kind eyes and loads of patience. The first girl I interacted with simply washed my feet and did a pretty good job disguising her disapproval of the state of my feet and legs (walking around a city in flip flops is messy!); I was a little embarrassed, however. I sat back down in the waiting area for hardly a moment when a girl with a warm childlike face asked if my feet had been washed already and then led me to her massage table. When I laid down, she looked at my feet and asked again if my feet had been washed. Apparently, they still didn't look clean. After skeptically accepting that this was as clean as my feet would get, she began her massage.

As I looked around the room, I noticed that the sequence of the massage was the same on each table but that each girl had a personal style. My masseuse was not rough, perhaps overly gentle, and as the massage proceeded, she would catch my eye and smile shyly. As I lay there enjoying being stretched and pulled, popped and prodded, I could only think about what crime my masseuse could possibly have committed. I was too shy to ask, so I will never know, but she seemed too gentle and kind to have done anything very punishable.
I left feeling happy and warm and the feeling lingered as I walked through the evening streets watching the day's business wind down. The post massage glow did not fade until much later: probably after stuffing myself sick at the vegetarian buffet at my guest house. And as it did, I began to wonder if I felt like I had taken advantage of the girls at the prison massage parlor or if I had paid them a service by visiting the facility. Months later, I still don't know. I don't know exactly what was the girls' cut of the minuscule fee I paid. And, how many hours did they work? How many days a week? Did they enjoy it? Did it feel like slavery to them? Being too timid to ask, I won't know. But, I can imagine how I would feel in their circumstances.
Two days later, I visited an elephant camp on a full day tour I had booked through a tour company a block from my guesthouse. The elephant riding was the first activity of the day and I was a little apprehensive about what I might witness. These poor beings had just as little say in performing their services as the women prisoners. Elephants in Thailand are revered, but currently are in a bad spot. They had been in high demand during the height of the logging boom. But as the number of trees dwindled, the king proclaimed a moratorium on logging in Thailand and the elephants found themselves unemployed. Eating several tons of food does not make an animal a likely or welcome pet, so the elephants soon found themselves homeless, as well. Tourism in Thailand is the only thing that supplies enough income to support elephants these days, and many elephant camps that give tourists elephant rides and the opportunity to care for elephants have sprung up throughout the country. The camps have varying reputations, with some taking very good care of the animals and others being rather cruel.
The camp I visited this day fell somewhere in the middle, but closer the humane side than the cruel. The mahouts, the men that trained the elephants, seemed well connected with the animals and were skilled in directing them. The mahout that led the elephant I rode invited me out of the tourist seat and instructed me to sit on the elephants neck. He failed to give me any further instructions, however, so I had a bumpy ride (I later learned that it is important to sit as close to the head as possible to have a stable ride). As we rode along a quaint forest trail, I fed the elephant a banana each time he reached his trunk back to me. Occasionally we would stop at little shops on stilts so that I could purchase another bunch of bananas for 20 Baht (less than a dollar), and we would be on our way - walking along the trail with me hanging on for dear life, the elephant munching bunches of bananas and easefully ambling forward, the mahout snapping pictures from the ground as he walked beside us and occasionally giving the elephant an order.
Most of the ride was very pleasant, only once was I forced to consider the well being of the elephants. The elephants wear chains around their ankles that attach them to trees or buildings. Someone later told me that the elephants are fully able to break their chains whenever they wish, but that they stay because they are satisfied; they have food and water and are cleaned up after and given daily exercise.  That seems reasonable, but after noticing an elephant chained to a tree quietly swaying back and forth with a bored, crazed look in its eyes, I had to wonder if the elephants were happy and fulfilled. They are so smart and soulful, surely walking in large circles and begging for bananas all day cannot be enough.
It occurred to me that as I enjoyed a massage and a delightful ride through the forest, the humans and elephants involved were enduring indignity and simply smiling and performing a service because they had no other choice. Would I do it again? Would I go back to these places and have another $7 massage from a prisoner or $10 elephant ride? I can't say. But, I would encourage others to visit and come up with their own conclusions. 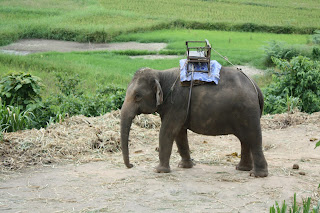 The elephant that carried me through the woods. 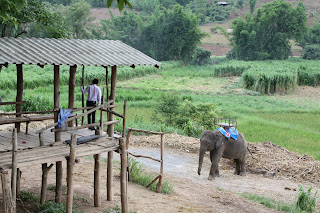 Another captive elephant walking up to meet its next rider. 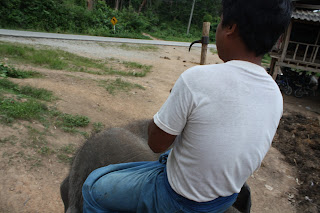 The mahout who has trained and cared for the elephant I rode. 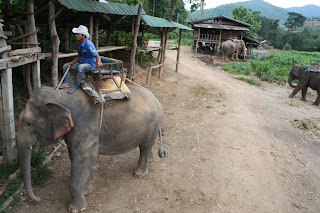 Another mahout with his elephant.

Posted by Unknown at 7:13 PM No comments: