Jamie and I moved into the apartment that will be our home for at least the next year this past weekend. Are we excited? Well we are happy to be a little more settled and to have more space, but, once again, the Air Force kind of screwed us. On base vs. off base housing has been a major point of contention between me and the Air Force since Jamie and I got married. The AF, being quite infatuated with rules, has a plethora of rules about where you can live and when. For instance, while you are in training, you must live on base, regardless of age, rank, behavioral record, or preference. This rule got us while we were living in Albuquerque. Jamie's career field has an abnormally long training period. While most new airmen have a training period of 3-6 months, the pararescue pipeline is about 2 years long. And that is if you go straight through, it can be even longer if you get set back or are injured. So, when Jamie and I got married and wanted to move in together, we were only allowed to live on base, despite Jamie having been in the Air Force for 9 months.

Living on base in Albuquerque was not actually terrible. Kirtland AFB is a large base, but most of the area is just fenced off desert. The part of base where people live and work is pretty compact and the housing is quite near the gates. Sure, it would have been great to have a cute little one bedroom with a yard (and chickens!) in the Nob Hill area so we could walk to bars, restaurants, breweries, and The Guild. But, the base really wasn't that far away from things. Everything was close enough that I used a bicycle as my only means of transportation for a whole month after selling our car. So, while I grumbled about our lack of choice, the situation wasn't that bad, and soon Jamie would graduate from training and the Air Force could never tell us where to live again.

Just kidding. It is true that we were free to live wherever we wanted while we were stationed in Georgia. I think we made the most of it, too. But, the exception to the rule is overseas assignments. Overseas, The Air Force can force anyone to live on base. It seems there is some sort of agreement with the private company that builds and maintains the on base housing that the government guarantees that the housing will be occupied. If not enough people actually want to live on base, then the Air Force will take away your choice.  For us, base housing must be 98% full to receive permission to live off base. We arrived at a busy time and a lot of people were moving on base, so we were hopeful. When Jamie went to the housing briefing, we found out that Kadena, our new base, was in fact above 98% occupancy, but there was a new rule. Now, in order to be allowed to live off base, Kadena and its sister base a couple miles a away must both be at 98% occupancy. The sister base was not at 98%. We were told that we would not be allowed to live off base and that we might even be offered housing at the nearby sister base so that we wouldn't even be living on the base where Jamie was working! Ironically, this new rule is called the "live where you work policy."

Jamie is required to be on alert in case any training flights go awry, and therefore really does need to live near his squadron. The commander signed a letter saying that we should not live on another base, but it wasn't enough to be permitted to be live off base. Eventually, the housing office offered us two potential places to live. Technically, we could have refused these places, but if we did, we would not be offered housing again for 3 months and would not receive money for housing during that time. The kicker to the whole situation? The housing office is not required to offer us pet friendly housing and being offered a place where pets are not allowed is not an accepted reason to turn down housing. We could have been shown two places where Gnasher was not allowed to live. Our choices would have been to give up Gnasher (who we just flew across the globe), or to wait three more months and pay out of pocket for housing in the meantime. Luckily (everything is relative), the housing office showed us one apartment that Gnasher was not allowed to live in and one apartment where Gnasher was allowed to live. So we weren't totally screwed, but we really didn't get to make any choices about where we would be living.

Our apartment is in a multiplex (2 upstairs apartments and 2 downstairs apartments) in the back corner of the base. We are about a 10 minute drive to Jamie's work and maybe 15 minutes to get off base and go to the beach. Needless to say, that was a bit of a shock after living walking distance to the water for almost a month. While we were living in the off base hotel, we could walk to the grocery store, a convenience store, more restaurants than I can count, the yoga studio, and the ocean. Now, we can't walk anywhere, except around the giant military neighborhood we are living in. There are some positives, our kitchen is pretty sizable. We have a lot of counter and cabinet space, and a dishwasher - all things that are not found in apartments off base. There is also some green space around the apartment, so we can throw the frisbee for Gnash without walking to a park. But really, who minds walking to a park?

Essentially, I think it is unfair to ask military families to give up as much as they do and then take away basic freedoms like choosing where to live. Especially since these rules are not in place to keep us safe or aid us in any way, but rather to ensure a private contractor keeps raking in the doe. Jamie and I were pretty excited about receiving orders to move to Okinawa, but not everyone is stoked about living on an island in the Pacific ocean half way across the globe from everyone they know and care about. It is a sacrifice in many ways to ask us to move everything we own to another country. I think the least the government can do is allow us to live where we want so we can make the most of the move and enjoy our time overseas. We will still try to make the most of living here, but having to drive everywhere is definitely a drag. The worst part: I can see off base from my kitchen window like a forbidden fruit shining in the sun. But to get there, I have to drive through my giant neighborhood and go through a gate. It is absurd.

When the sun comes out I will add some pictures of the apartment and the neighborhood. I know you are on the edge of your seats... 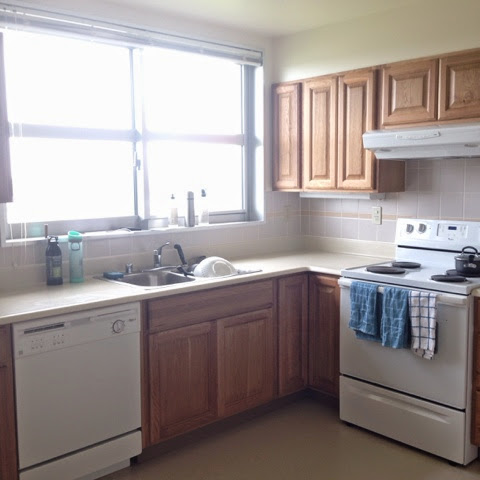 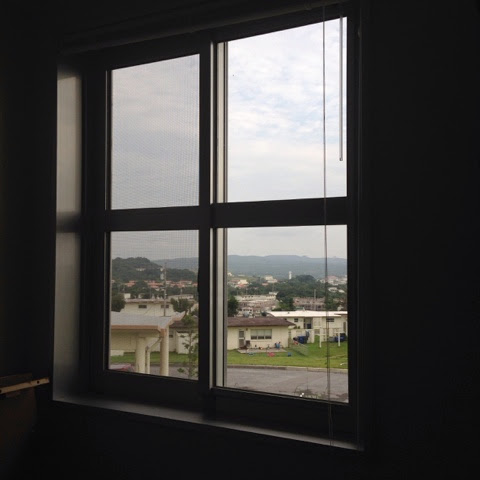 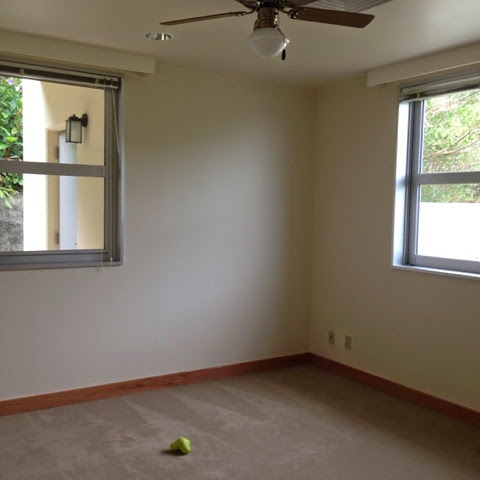 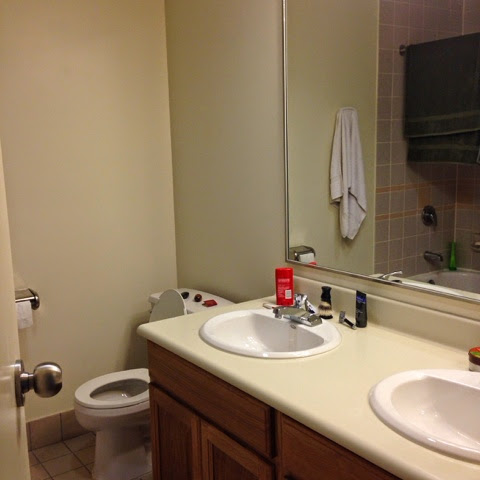 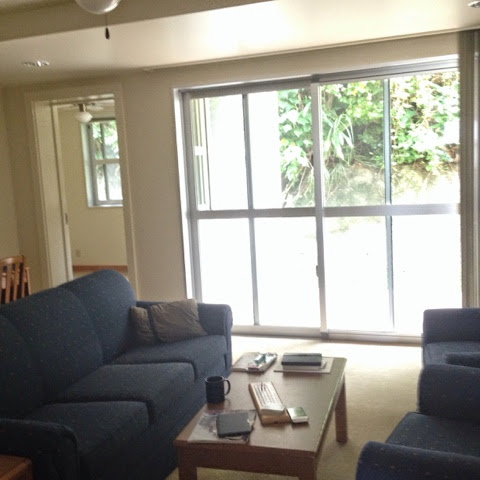 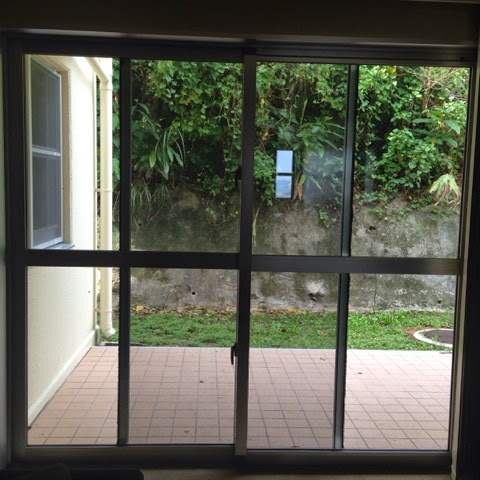 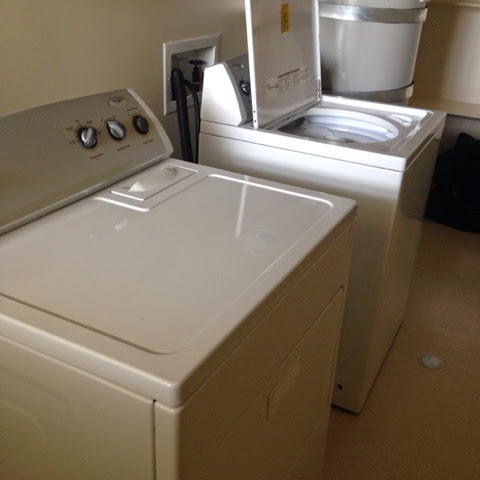 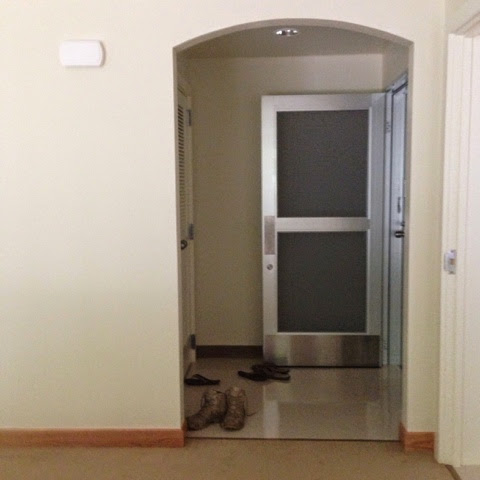 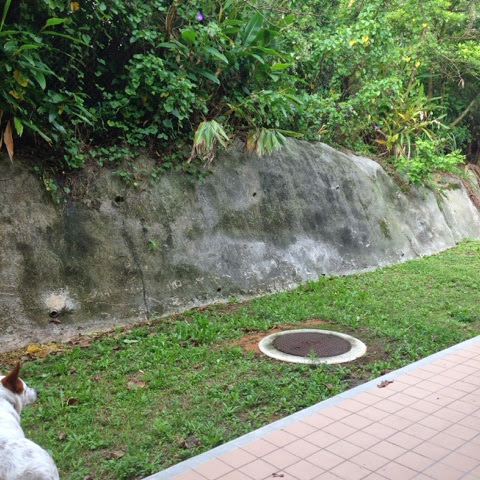 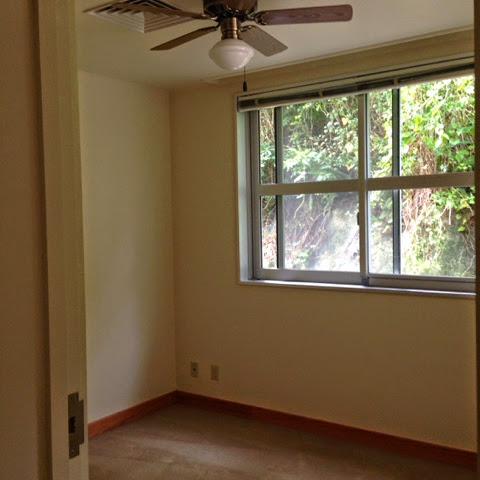 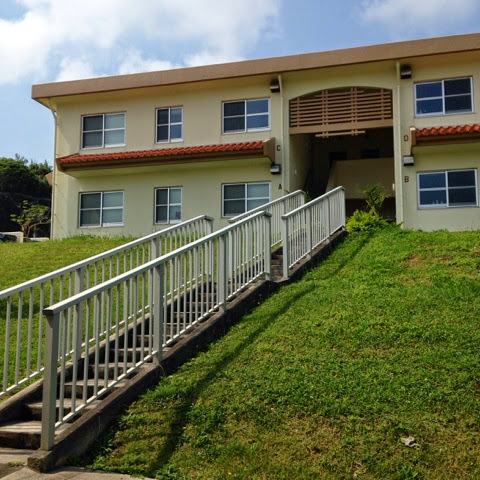 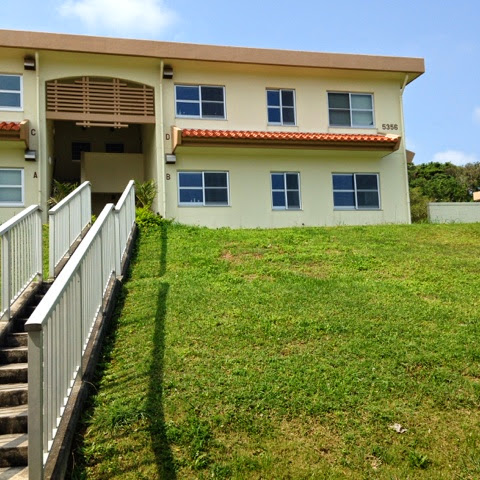 We are apartment B 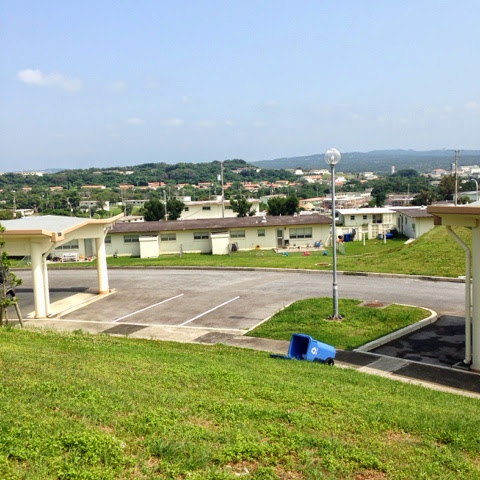 View from the front yard
Posted by Unknown at 4:05 AM No comments: